Ryan Murphy has been churning out great television for some time now and is a personal favourite of mine. Known for creating the much loved Glee and for making anthology shows such as American Horror Story and American Crime Story (which showcased the amazing People vs OJ Simpson last year) his latest endeavor ‘Feud: Bette and Joan’ has already been renewed for a second series despite only premiering in America on Sunday night.

Not only does Murphy create great shows but the cast he uses and frequently collaborates with are sensational. Take a look at the cast list of Feud: Jessica Lange, Susan Sarandon, Catherine Zeta Jones, Stanley Tucci, Kathy Bates, Sarah Paulson…it goes on!

I’m a huge fan of his and have been since I watched HBO’s The Normal Heart which he directed, and starred Mark Ruffalo, Julia Roberts and Matt Bomer, so combining my love for his previous works and the fact that he continues to work with some of my favourite actors and actresses in the industry it was a no brainer that I tune in to watch Feud. 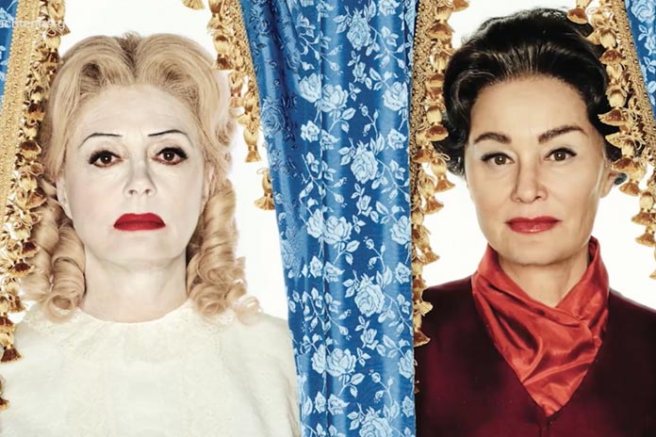 In short Feud is about the bitter rivalry between Hollywood legends Bette Davis and Joan Crawford and how this rivalry intensified during the production of their one movie together Whatever Happened to Baby Jane?

The first episode introduces us to the two actresses both ageing and no longer getting the roles they used to back in their glory days. Crawford spends the majority of her time lounging around her pretty impressive mansion and being invited to awards shows simply out of courtesy. Davis on the other hand is ‘slumming it’ on Broadway, playing the same thankless role night after night and returning home to an empty house. When Crawford stumbles across the novel Whatever Happened to Baby Jane she can think of no one better than Bette Davis to star alongside her in it’s adaptation.

Overall it’s a promising start, Lange and Sarandon give great performances with just the right amount of bitchiness to prevent the show from becoming a camp cliche. Lange plays Crawford as the subtle, sweet bitch, the one who brings gifts to the crew members on the first day of production, smiles sweetly then stabs you in the back. Sarandon’s Davis is much more overt in her distaste, she doesn’t beat around the bush, she says it as it is and plots with much more venom. You really wouldn’t want to take on either of them in a fight.

The supporting cast is sublime too, Catherine Zeta Jones and Kathy Bates appear as Olivia de Havilland and Joan Blondell respectively, serving as a sort of Greek chorus, documenting the feud for the cameras years later in the 70s. Judy Davis is great fun as the snooping journalist Hedda Hopper who tries and fails to get the two stars to speak ill about each other during an interview, and Alfred Molina’s take on Baby Jane director Robert Aldrich is fantastic, he has the ‘oh shit, what have I gotten myself into?’ look down to tee.

On top of this the show looks good, the set design is fantastic as are the costumes. The colour pops and the lighting creates a wonderful contrast between the lives of Davis and Crawford with everything bright and airy in Crawford’s mansion and solo scenes and a dim, gloominess surrounding Davis in her modest home.

The first episode has done the basics of setting up the rivalry and getting us ready for the ride to come. It’s gripping, entertaining and just the right level of camp, all I can say is ‘fasten your seatbelts, it’s going to be a bumpy night’