First things first – major apologies for being late on these Feud reviews, I shall blame my poor WiFi but we all know my own laziness is the real culprit.

That out of the way I’ll crack on with the review. Episode 6, the crudely named ‘Hagsploitation’ highlights what can only be described as post movie blues. Oscar season is done and dusted, Baby Jane was a hit but now our stars are back at square one, wondering what they’ll do next and how long they’ll have to wait. Bette, who thought she’d be offered role after role following her Oscar nod, has resorted to television, Joan finds herself starring in the cheap horror pic Straight Jacket (featuring the world’s least realistic decapitated heads) Bob meanwhile mopes around the house in his slippers. Even Jack Warner, right off of the success of My Fair Lady, is itching to get another hit, anxious that he is in the twilight of his career.

After last week’s glitzy Oscar episode this one brings us all crashing back down to Earth. It shows us just how low these people will stoop in order to remain relevant. Bob ends up sacrificing his marriage – although he really should have seen that one coming, his wife has been miserable the whole of this series – Hedda uses her ‘ill health’ to manipulate and practically blackmail her so-called friend Joan, Joan herself aside from doing Straight Jacket is yelling at Mamacita, throwing vases and even (gasp) apologising to Bette. Bette however stoops the lowest in my opinion, she revels in Joan’s misfortune at the airport and her lousy hotel room and undermines her at the table reading of Charlotte. This is low because previously Bette has (for the most part) always tried to rise above the bitchiness on set and surrounding Baby Jane, but now she’s as bad as Joan ever was.

Even minor characters are at their nastiest in this episode. We meet Joan’s brother who until now has made no appearances and we learn at once that he’s not a nice guy. Blackmailing his sister, threatening to make it public that she may or may not have appeared in a stag film, these are the lengths he takes just to squeeze money out of Joan.

It’s a great episode for Jessica Lange who somehow still manages to make Joan sympathetic despite her flaws. I mean, on finding her (admittedly not very nice) brother died in surgery all she can think of doing is cancelling the payment she had set up for him. Alfred Molina also has a great episode, the quick-fire montage scene of him getting Bette and Joan to sign up to Charlotte is a treat and his taking down of Jack is one of the highlights of the episode. As ever though, some of the best work is when Bette and Joan are featured together. Susan Sarandon is only lightly featured in this episode (she first appears 20 minutes in) but the table read scene is a gem, as is the scene immediately prior to this in which she and Joan begin to bicker over who should enter a building first, not to mention the scene at the hotel reception. Whilst this was definitely Lange’s episode (likely Emmy submission? Who knows?) Sarandon makes the most of her material and delivers a great performance.

Although I said Bette stoops lower than Joan in this episode, she redeems herself by the end. When she finds Bob upset over the divorce she at once forgets the issues she was going to burden him with and offers him some comfort. It’s a sign that underneath all the bitching and nastiness, Bette isn’t that bad a person after all. 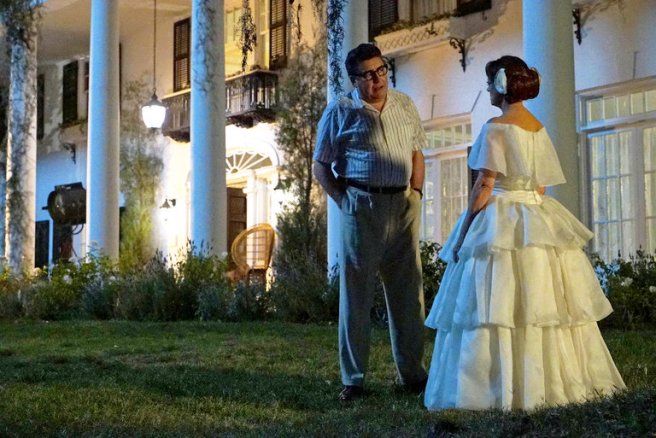