So as an early Happy Birthday to Ms Stefani I thought I would rank all the songs on her 2004 debut solo album: Love Angel Music Baby. All songs being tracks 1-12, I’m not including ‘slow jams’ or ‘elevator music’. 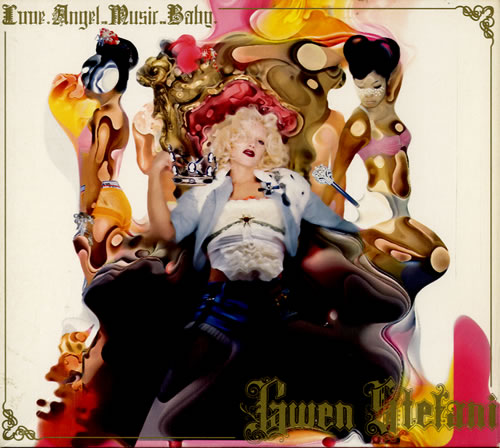 Long Way to Go is the weakest track on what is, in my opinion, a great pop album. I get the concept, I get the message but I just don’t like it. Compared to other tracks it just isn’t as fun or as heartfelt, plus with Andre 3000 featuring so prominently, Gwen feels almost like a footnote in her own song.

No doubt this is a fun song (see what I did there?) but Gwen’s love letter to Japan’s harajuku girls doesn’t hold up as well as the rest of the album. Learning all the lyrics is dedication though.

I don’t love serious but I don’t hate it either. It’s just a bit…boring.

Gratuitous French, champagne, limousine rides and of course, Egyptian cotton, this song is filled with fun and oozes glamour. However after a couple of listens its shine begins to fade.

This is was a hit and a half when it was released and still holds up today. Featuring Eve and paying an unconventional homage to Fiddler on the Roof, Rich Girl is sing-alongable fun but gets knocked down this list by some real classic Gwen hits and some forgotten gems.

If you couldn’t guess from the title, this is one fun song. Telling the story of Gwen and Johnny (aka Andre 3000) the whole number is basically about getting it on in the car (tonight I’m gonna give you all my love in the back seat). It’s good fun and the tune is as catchy as they come, despite this, as good as it is it never really transcends above ‘nice’.

So this album make it clear that Gwen has some sort of car fetish. Another ode to auto-erotica, thinly disguised by the 80s inspired production, Crash is less twee and coy than Bubble Pop Electric and gets to the point in its blasting chorus. Another undeniably fun song that, let’s face it, you really shouldn’t have been singing along to as a child.

This is probably the most underrated song on the album. Oozing 80s pop and jam packed with hooks, this could have made a decent single. Sure, lyrically it’s nothing profound but at least she’s not singing “do me fast in your car” anymore. Danger Zone is definitely worth dusting off the album for.

At first this song doesn’t seem to fit the mould of the album; slow, romantic, almost acoustic, and could easily be mistaken for a drab “let’s slow things down” track. There’s nothing drab about this tune, in many ways it sounds more No Doubt-esque and it’s 90s, late summer vibe make it the ultimate nostalgia track, reminding you just how good Gwen’s music can be.

Put simply, this song is iconic. Whether you were ironically listening to the clean version or naively thinking you were original creating a cheer routine to the stomping beat, Hollaback Girl is the ultimate Gwen Stefani song and deserves it’s place at the top end of this list. Plus, hey kids spelling is fun!

2. What You Waiting For

The album’s opening track not only introduced us to soloist Stefani in the most in-your-face way, but also tells a fun and creative story, documenting Gwen’s departure from No Doubt, her concerns about going solo, and the ticking time bomb that female artists are subject to in the music industry. Intense, bipolar, and pure fun, the fact that this song has been largely forgotten is a tragedy! Go and listen to it now – what you waiting for?

This song is fantastic. Everything about Cool just oozes class and is what pop music was born to sound like. Gwen’s voice sounds best on this song but the production remains as slick on some of the wilder previous tracks. One of the only ‘personal’ tracks on the album, the song was written about Gwen’s ex-No Doubt bandmate and ex-boyfriend Tony Kanal with whom Gwen managed to stay friends with (read ‘cool’) after their breakup. Relatable, summery and with a music video Versace would be proud of it’s Cool by name cool by nature for this track and it’s by far the best song on the album.